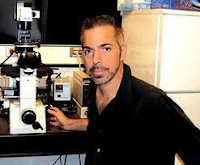 The term was proposed in 2007, by American  doctor of Medicine Robert Lanza in his article of  The American Scolar  titled “A new theory of the universe”.  According Lanza,  biology is above the other sciences such as physics and chemistry and life creates the universe instead of the other way around.  Two years later, Lanza with astronomer and author Bob Berman published a book entitled Biocentrism: How life and consciousness are the keys to understanding the true nature of the universe.  In this book the authors claim that the space and time are forms of animal perception, rather than external physical objects. Lanza wrote that :
“Everything we perceive is actively being reconstructed inside our heads. Time is simply the summation of the ‘frames’ occurring inside the mind. But change doesn't mean there is an actual invisible matrix called “time” in which changes occur. That is just our own way of making sense of things.”
Sources
1.  A new theory of the universe, Spring 2007 The American Scholar
2.   Lanza, Robert and Berman, Bob (2009).  Biocentrism: How Life and Consiousness are the Keys to Understanding the True Nature of the UniverseBenBella ISBN 978-1-933771-69-4
3. Robert Lanza and Deepak Chopra (October 19, 2009). The Illusion of past, present, future San Francisco Chronicle. Retrieved August 30, 2012
2. http://nirmukta.com/2009/12/14/biocentrism-demystified-a-response-to-deepak-chopra-and-robert-lanzas-notion-of-a-conscious-universe/

Definition
Biocentrism is a theory which supports  that biology is the science of everything as  the universe exists specifically in relation to a conscious observer. According this theory space and time are products of human consciousness and do not exist outside of the observer.